Future rate hikes may be good for the crypto markets as…

Binance applies LUNC tax burn to trades including past…

Since September 9, the total cryptocurrency market cap saw net inflows totaling $73.4 billion to climb back above the psychological $1 trillion mark once again. As of press time, it stood at $1.055 trillion, up 7.5% over the weekend.

Over the last 24 hours, the top 10 cryptocurrencies traded largely flat, with Bitcoin posting gains slight gains of 0.99%, with the rest of the large-caps seeing minor sell-offs. Cardano (ADA) was the biggest large-cap loser, posting -1.78% losses. 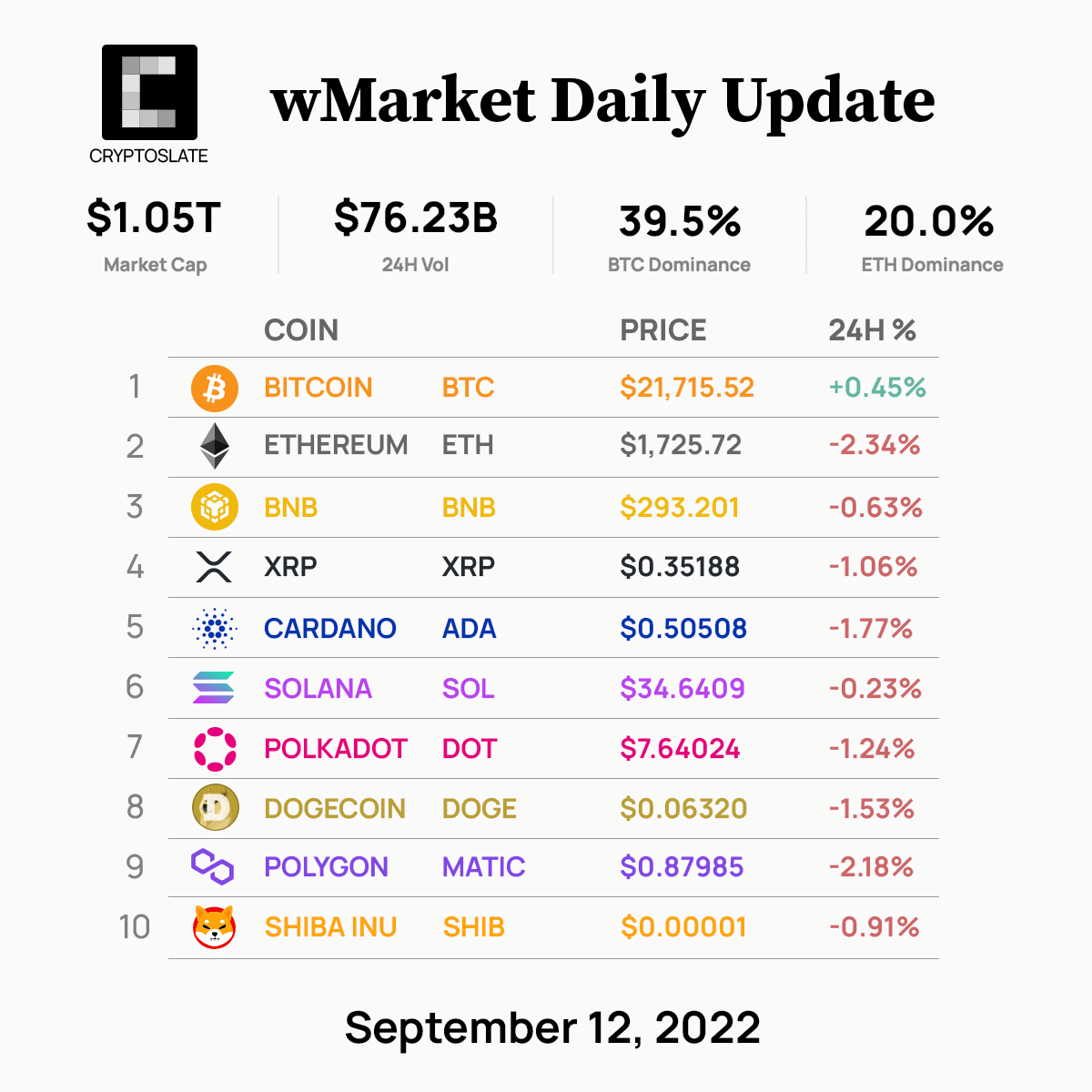 The market caps of Tether (USDT) and BinanceUSD (BUSD) were up marginally over the weekend, standing at $67.74 billion and $20.05 billion, respectively. In comparison, USD Coin (USDC) saw a slight drop to $51.60 billion.

The leading cryptocurrency is still down from the $23,400 local top from August 15, and with the daily Relative Strength Index (RSI) curling back over on the daily chart, it’s unclear whether bulls have enough for a re-test of this level.

ETH is down 14% from the $2,025 local top achieved on August 14. Having bottomed on August 29, an uptrend has ensued, but like Bitcoin, the daily RSI is curling back down, suggesting a loss of momentum. The Merge is expected to occur around September 15.

The price of USTC fell 16.33% over the past 24 hours to around $0.051 as of press time. However, the token’s market cap grew to $505.74 million from $415.96 million last week. Algorithmic stablecoin USTC slipped off its peg in May and triggered the collapse of the Terra ecosystem and the larger crypto market.

The value of LUNA fell 14.22% over the past 24 hours to reach around $5.29 at the time of writing. LUNA is a rebooted versions of TerraClassic (LUNC) which collapsed in May. Despite the fall over the day, the token is up 195.29% over the past 7 days.

Like its newer counterpart, LUNC also declined over the past 24 hours, trading at $0.0004 at the time of publishing — down 10.41% over the day. Irrespective of the price decline, the token is still up 61.4% over the past 7 days. The new v22 upgrade that enabled token staking provided a boost to the community, pushing the token price up over the past few weeks.

VGX was down 9.16% over the past 24 hours to trade around $0.89 at the time of writing, eliminating most of its gains from the past week.

The Voyager assets auction is set for Sept. 13, the results of which need approval from the court on Sept. 29. The company had filed for Chapter 11 bankruptcy on the heels of crypto hedge fund Three Arrows Capital going bust.

Get an Edge on the Crypto Market 👇

Binance applies LUNC tax burn to trades including past transactions

PPC
Subscribe to our newsletter
Sign up here to get the latest news, updates and special offers delivered directly to your inbox.
You can unsubscribe at any time